https://crystalwarriorscp.wordpress.com/ We were once a medium army. Then after one leader retired(Blackfalcon2), everything lost control and fell. It later became small but it's getting bigger each day! The creator of CW was Frostyeagle. He was a good leader and will never, NEVER gives up. Our main color was blue. Also, before we were really CW, we had 2 names.

Frostbite Troops was not as large but got large by time. They have a lot of wars. But before they really became Frostbite Troops, they had to invade Frostbite. But, they had an easy win. After that Frostyeagle thought that the name was nooby and changed. The new one was Frozen Strikers which is way better than the old one.

Go, go go! Frozen Strikers attacking Big Foot. There next invasion was the Crystal. But first they had to attack Big Foot. DT’s Capital. A few minutes later, they lost to FS. DT escaped to Parka and attacked ST. Then, while Frozen Strikers where heading for Crystal, there was a sudden attack. It was Element Warriors. They drove FS to Snow Cone. Making Crystal a harder way to attack.

After EW. Took down FS to Snow Cone. They fought them. It took a while but Frozen Strikers retreated. They came back to Big Foot. While they were at the server, they noticed EW troops on the other side of the land. After they left FS decided to patrol all of the Big Foot borders and other places. EW later, invaded and defeated all the patrollers. After that they lost and had no were to go. And now they know EW is after Crystal too.

When they were exactly at the server bordering Crystal, which was Parka, they saw DT getting ready to invade. They overheard them saying that they were invading Crystal! Then while DT was leaving, they attacked. EW came out. It was a three-way battle! The 3 armies all agreed that it won’t be easy to defeat. After many battles. DT was halfway of defeating EW until FS took DT down. EW came back up and took EW and FS at the same time. After the battle, FS had took Parka.

After the battle. All the armies had rested. EW and DT both retreated home. FS stayed at Parka and trained and recruited. After that. They headed for more battle. They had recruited many troops and were ready to attack. Crystal. FS had always dreamed of taking over it. Crystal wasn’t an easy way to attack. Falcon had his troops ready surrounding Crystal. FS later charged the server. And fought the owner. Later they won and left!

After they were ready to leave and went, EW suddenly ambushed them! FS called for reinforcements in case they were losing. After a while when EW almost defeated FS, reinforcements came just on time! FS was not losing anymore and won! Once again FS won. After they left Crystal, FS now made Crystal their capital. Then they changed there name, to The Crystal Warriors!

The Army CW was still not official no site no chats.. no nothing. Until one day the True CW began.. It all started with Frostyeagle. The leader of the non official CW. People started to join CW. It got larger and larger each day. KA-BOOM! Their first war with DT started. After the battle, we became new rookie allies. That battle turned CW to history…

After the battle, it was spreading everywhere, But back then, CW and DT and very large. It also increased the number of soldiers in both CW and DT. We got so much.. we told them to join other small armies. The battle was started by EW. They thought they won but Dt thought they won. They argued and argued until we came to stop all the wars. EW was full of anger and left without a word. DT was angrier than EW. They made a competition and DT won. EW argued again. We were tired and created the largest war of all mini armies. EW left about 15 minutes. So actually EW was not official in the battle. The war lasted 1 hour and 45 minutes.

After all the madness, we all forgot about it. But DT was larger than we ever imagined. It looked like a Dark Hole. They looked deadly. So we invaded Parka which was a very stupid idea to do that. I’m not kidding… DT took over 3 quarters of the entire server. We didn’t back down. We had asked EW for a little assist. We were this close to defeating them. Then we created the Sea Alliance. DT were worried about their capital, Parka. We invaded Parka at the right time, November 16, 2008. Located at the Dojo. The Black Hole was still bigger than our Alliance. We were only a few troops away from getting larger than DT.We failed…

After their large battle with ST. They took a long rest. And I mean long. ST fled out Parka. They also told us one thing…”We warn you… Ugh, there stronger than…anything you can think of..” We were shocked and attacked DT will all our Tactics set! After the first 30 minutes we got beat up! But we used our tactics special ones too! And finally DT fled to Iceburg. They were trying to recruit but Icepillar and his troops attacked the Iceburg. More troops started attacking. DT had even less troops. Finally we arrived with EW! CW and EW finsished DT up! and the other guys took care of the other small troops of DT. Those guys, heh they were over!

We were relaxing with no wars in the entire server for once. We decided to return to Crystal. By the time we got back…We were speechless. ST attacked our capital Crystal. So ST fled to Crystal! So we attacked ST’s main capital Parka. But we promised not to fight at the area and we didn’t fight back. But once ST went to Crystal we ambushed them. and let EW guard it.

ST and DT teamed up and attacked Crystal directly! EW was down and we ran to Crystal as quick as we can. KA-BOOM!! Plaza was hit by a large bomb. We were okay but our capital wasn’t. We were raging with fire. We attacked Parka doesn’t matter if there was peace on the server. We destroyed everything we saw. Still, we guarded Crystal. Our rage went overpowered and destroyed DT and ST. They were shocked and completely surrendered.

After the war both DT, ST, and CW was injured and started training. EW had later stopped guarding Crystal. Parka was destroyed and started recovering immediately. After a few months, we were recovered and left. Then after we left we saw EW invading Crystal! It was an epic betrayal.

Cw tried as hard as we could to defend Crystal. Somehow Ew betrayed us! It was very shocking. After a while DT came too! But they were easy until ST came! We fought and tried our best and won! It was easy now after DT lost leaving only with EW and ST. We bombed the ST and won. EW retreated and moved up to North Crystal. We quickly recruited and then attacked back. Then finally EW surrendered. They said they would never attack once again. EW made a promise to CW to not invade Crystal ever again. We finally had peace on Crystal.

Theres more but these are mostly old Leaders. Most of them are retired so you hardly see them now. Actually you can't anymore.

The Nation of Crystal Warriors

Here are the servers we owned:

Yeti (Owned Half and Meduim Base, Recruitment Server)

Frozen(Main Base and Training Server)

Icicle(Owned 1/4 and Meduim Base, Recruitment Server)

Heres our Allies, Neutrels, and Enemies! 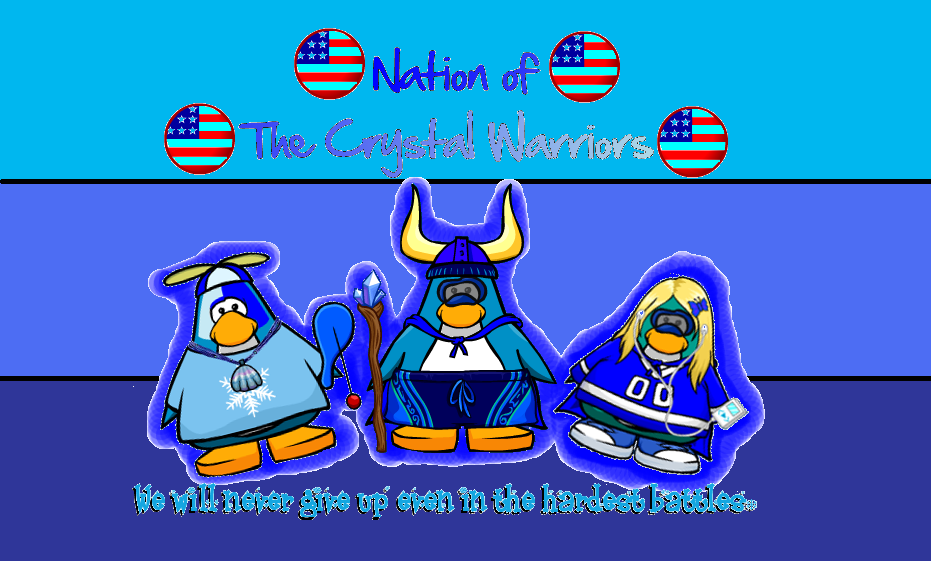 We have a long history and please do join our army! Just go to our site and join. www.crystalwarriorscp.wordpress.com/

Retrieved from "https://clubpenguinarmy.fandom.com/wiki/Crystal_Warriors?oldid=29377"
Community content is available under CC-BY-SA unless otherwise noted.