Epic began playing Club Penguin in the year of 2008. He had many names for his penguins however, the most notable would be "EpicMaster" and was an active young member of the community his preferred games at the time were Cart Surfer & the Pizza ting, little did he know he would one day become one of the most influential members of the Club Penguin & Army Community.

Epic's introduction to armies was not through the Club Penguin game itself but a XAT group which tracked "Monchoncho", a Club Penguin social media influencer. He was recruited to the Pirates Army by Waterkid100, Captain of the Pirates at the time and over a period of time, Epic rose to the rank of Fourth-In-Command. He would maintain this rank & his loyalty to the Pirates & Waterkid100 as time went on, even after the Pirates merged into the Light Troops.

At the end of January 2015, the Dark Warriors would ask for a cease fire and the cease fire would last well into February of 2015. Following this, the Light Troops' leadership of Andrew24, Elmikey, Jester & the Drew Crew would depart the army following a prank by Waterkid101. Waterkid, Roberto, Bam117 and DrMatt would then return to lead the army together and Epic would move up as a 2nd-In-Command of the army. - In March of 2015, the Light Troops went to war with the Nachos & the Watex Warriors. The war lasted for a number of weeks before the Nachos surrendered.

April proved to be a difficult month for Epic & the Light Troops as they began by declaring War on the Army of Club Penguin which led to a demolition of the ACP Empire. Within a couple of days the Light Troops had marched onto Breeze and invaded it without opposition. On April 4th 2015, Waterkid announced his resignation from the Light Troops and claimed he would return in July 2015, leaving the army in the hands of DrMatt, Epic & Tobercold. Results appeared to be poor, average sizes dropped between 17-30 on a daily basis. These sizes stayed the same until May 8th 2015, when Waterkid announced his return to the army and introduced Bot Recruiting. The first event in this new Light Troops Era saw sizes of 45+ with a demolition of RPF and Doritos.

Over the course of the summer of 2015, the Light Troops continued to rise with the increase in the Bot Recruiting evolution introduced by Waterkid. Epic would become a support & would help in recruiting for the new generation of the Light Troops and sizes never dropped below 35 for the remainder of May 2015. As well as the introduction of Bot Recruiting, the Light Troops began giving Free Memberships to those who attended battles. This resulted in a huge influx of new recruits every day, thousands of site views & new Light Troops came and joined every day.

This increase in size saw the Light Troops begin to average sizes of 40-50 each night, sizes not seen since December 2014. CP Army Central announced its new tournament the "Spring Smackdown" which is where the Light Troops would be in their element and walked their way to the finals. However, on May 26th, DrMatt resigned from his position as leader and rec-reated the Blue Miners Army in an attempt to rebel and attack the Light Troops. This would prove to be no problem as they would go on to defeat the Ice Warriors in the Spring Smackdown Semi-Finals just days later. This is when Epic was introduced as a Hall Of Fame member in the Light Troops and became one of the few remaining Light Troops owners.

Two hours later, the Light Troops returned with a Liberation of Ice Box where they saw sizes of 65+, sizes that no army in the community had seen since the summer of that year. The Light Troops had 92 troops viewing the website with 3 pools full of troops on their xat chat. At the same time, they managed to make Ice Box a 2-Bar server. History was being made. Over the course of December, the Light Troops declared war on the Water Vikings, the Army of Club Penguin, the Doritos and RPF, all of whom were destroyed each time the Light Troops turned up to invade their land.

Below is a gallery of some photos from the Light Troops Winter Era from December 20th - December 23rd 2015.

As mentioned before, the Light Troops would invade every army's capital over the remainder of the month, starting with RPF's capital Tuxedo and then the Army of Club Penguin's capital, Breeze on New Year's Eve.

As all armies were in fear of the Light Troops' sizes at this time, no one wanted a battle or showed up to any of their invasions. As a result, they had a practice battle with their allies, the Nachos which saw similar results to their previous invasions of the likes of WV, ACP & RPF. Many army veterans and legends were stunned by the sizes and power of the Light Troops, this type of domination hadn't been seen in years.

In the brief period after the Christmas Chaos in 2014, when Elmikey was fired from the Light Troops & the Drew Crew departed, the Light Troops temporarily closed, this saw Epic101 gravitate towards the Redemption Force and Reacon. Epic would lead the Redemption Force for 2-3 weeks and would lead them in what was their greatest golden age during original armies. They saw sizes peak at around 25-30 and placed 4th on the CPArmy Central Top Ten for the first time in their history. Epic would then return to the Light Troops soon after to aid them in their return from a collapse after leadership issues.

After a number of battles, the Redemption Force were left with no choice but to Coup Max from their leadership after their Multilogging scandal was exposed to the community. As a result, Konrad, Redemption Force Leader, asked the Night Warriors & Fire Warriors for the war to end, and it did. It was a Fire Warriors victory. - Around the same time as this, the Fire Warriors managed to peak at Number #2 on the CPArmy Central Top 10 Armies list, the following weak they finished in #4 on the same list. The Fire Warriors Shut Down in March 2016 after the Light Troops announced yet another return.

Below is a gallery of Fire Warriors event pictures. 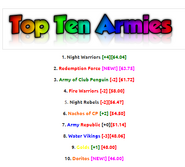 FW 4th on the Top Ten

The Fire Warriors Shut Down on March 15th 2016 as the Light Troops announced an Easter Return.

Just two months after the Light Troops Shut Down their Winter Golden Age, they announced another return, this time during the Easter Break under Waterkid101 with the additional owner squad of Epic, Tobercold, Revan & Jessie. Much like their Liberation of Ice Box in December 2015, Epic was yet again pivotal in preparing the new recruits for the upcoming event. He held an unscheduled Training on Ice Box 2 hours before the Liberation of Ice Box with sizes of 47-49 Light Troops.

This new generation of the Light Troops would prove to be like no other. During their Liberation of Ice Box on March 26th 2016, they achieved sizes of 102+ troops online with three full pools on xat as well as circling the Ice Berg & the Town at the exact same time. These sizes of over 100 troops online at the same time had not been seen since Boomer20's retirement from ACP in 2012. - Moving past this, in the following days the Light Troops would engage in battles with armies such as the Water Vikings, the ACP & the Army Republic, all which resuled in victories for the Light Troops, in each battle the Light Troops' sizes never dropped below 60.

Between the wars with Night Warriors & RPF, Epic was left to lead many of the training events & battles against the likes of the Green Mercenaries & US invasion of Tuxedo & Mammoth and more of the same pre-battle trainings before the invasions of on Ice Rink & Crunch. The Light Troops would go on to claim victory in the wars with RPF & the Night Warriors as both armies stopped showing up to invasions, leaving their land free to take. - The Light Troops then shut down once again on April 23rd 2016. During their two month resurrection, the Light Troops never dropped from #1 on the CPArmy Central Top Ten Armies. Much like before, Epic & Revan departed to create their own army, this time, they revived the Marines with permission from Sidie9.

Epic & Revan's leading partnership & quality was seen just months earlier when they managed to lead the Fire Warriors to #2 & #4 on the CPArmy Central Top 10 Armies. This time around they revived the Marines alongside Jack283, a former Water Vikings leader. This return was highly anticipated by members of the community as they brought many skills that they learned at the Light Troops to the Marines, including membership giveaways & bot recruiting. Their return event, being a Liberation of Ice Box saw them max sizes of 25, taking the community by some surprise.

Following their Liberation of Ice Box, on April 27th 2016, they declared war on the Rebel Penguin Federation and successfully invaded Tuxedo, their capital on the same day with sizes of 30+. RPF never showed up to any of the Marine invasions, claiming that their invasions were all within 24 hours of each other & the Marines proceeded to invade their land.

Epic returned to the community after noticing several armies were on Club Penguin Online, a CPPS ran by his life-long army career friend (former Light Troops & Pirates Leader), Waterkid. At the time a war between the Templars and Rebel Penguin Federation was brewing, Xing gave Epic the opportunity to lead the Templars. The Templars defeated the Rebel Penguin Federation and after a week of leading Epic decided to create his own army, the Omegas. The army did well even though short-lived they were able to max 45 penguins. During this time Epic was given the opportunity to be a moderator on Club Penguin Online and shortly after, Epic was offered to revive the Pirates.