Club Penguin Army Wiki
Register
Don't have an account?
Sign In
Advertisement
in: NR, Armies started in 2015, DW, Armies that are dead

The Night Rebels was an army created on December 30th, 2015, just before New Year's Eve. They were created by Wozza, Tirodragon, Misty and Haroon. When the Dark Warriors were being shut down by XxToysoldier alongside Freezie66, the DW troops were shocked and decided to join other armies. Misty came up the ideas and redirected her troops to a separate chat. Misty and Tirodragon brought the idea forward, so basically it was just weeks of chilling on chat, trying to keep motivation up and getting the site prepared before it started. Then Wozza, Haroon, Jack, Perry and Red, came along to help the army rise after the shut down of DW. The Night Rebels first event was “Back to School Army Clash” on January 3rd, 2016 – against the legendary armies, such as Army of Club Penguin, Army Republic, Rebel Penguin Federation, Ice Warriors, and Nachos. The battle host army by RPF, said that its not decided on the sizes, but decided who stayed on Club Penguin the longest, and claimed victory. The NR has a first event which is the tournament called Winter League on January 8, 2016, after the active count was being held, and declared as victory by maxing 14+ against the small Imperial Argonaut Empire, and moved on to the next round. 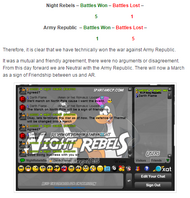 War with AR, won victory many times - the AR surrender.

The Night Rebels finally waited so long after a week of Winter League Tournament Semi-Finals, against the Star Wars Army[SWA]. The SWA was a no-show during this battle; and had a little fun, then later on claimed victory and moved on to the Finals round of Winter League. After having so many events practicing, the Night Rebels had their last chance of fighting an army in the tournament, against the Fire Warriors. The finals battle was a bit tricky for NR and was unsure if we could secure a victory. The shocking news of this battle, is we won the battle against the Fire Warriors, the FW were exposed of using multilogs (If that didnt count, we would still win.), maxing 26+ and averaged 24+! The army continues to rise bigger, having another event and getting 3rd in the CPAC top ten!

On February 13, 2016 – Wozza stepped down from NR leadership and joined the Water Vikings. Perry has also retired from the NR. Kyle103 and Andy was being promoted as leader and got hired to help keep the army going, as well as making things bigger for the army. Wozza and Perry’s leadership were short-leading this army, but they did serve well.

The NR had a Practice Battle with the NW, maxing 13-14+ on Club Penguin and lose the battle. The NW was cheating but later on called them apologized. The NR had a great time to keep going without Wozza and Perry during this generation, alongside with Kyle103, Haroon and Andy to help this army to keep going. But Andy was removed because he isnt ready to become a leader yet so he quit NR[he didnt accept my offer of being 2ic and still AUSIA leader]. Haroon stepped down as advisor from leader. Our new leader, Lenore, has stepped down from depressed, so she moved on. On Feb 23rd, the correct leadership are Kyle103, Carlos, Jake, Snow and Tirodragon. Jake got couped 2 weeks ago, and came back last week, but didn't know that he was sick. He left Night Rebels afterward and quit, bringing the stuff with him.

On March 13, 2016 - The March Madness Round 1 begins, and we were able to battle with the Wild Ninjas. We won this battle, and moved to the next round! We managed to get 25+ on Club Penguin.

On March 16, 2016 - The Night Rebels was struggling with the correct leadership, so Haroon Niaz decided to change the leadership and administrative due to people being inactive, and how that we suffer from a lot of problems and the main reason was that the efficiency of our leadership wasn’t up to the level which is required by the army. The new leadership were Kyle103, Finwobbler, Rishron and Robot. http://spartanscp.com/2016/03/16/leadership-changes/ .

On March 20, 2016 - http://spartanscp.com/2016/03/20/cpac-march-madness-iv-round-2-times-nr-vs-rpf-results/ , March Madness Round 2 begins, and we were able to battle with the RPF. This was the tough battle for us, and we were going to the Town, as the beginning before going to the Beach. We were able to increase more sizes than the RPF. We were able to max 25+ and we lost from this battle, the RPF wins. Somehow there was a bit problem with the CPAC judges stating the "3-0" vote to the RPF, and doesn't look at the sizes properly. They did not put the right results as of now. Here's proof of what Kyle103 private chat Atticus for his opinion of the results of March Madness below.

"The Night Rebels wins in our heart, it was not yet to be official. ~Kyle103"

After the issues with the March Madness results, yesterday of March 22, Goblin fixed the schedule for us to battle for the second chance! The name that he called, was "Redemption Round Schedule." We will battle vs Nachos and Ice Hounds as of today. The Ice Hounds didn't attend because they don't feel like to, so we just battle with the Nachos. Sadly we lost this Round to the Nachos, but the NR did good from this round.

NR declared war on the The Green Mercenaries Army, they surrendered the war and transferred their whole nation to us before even meeting us on the battlefield.

The Night Rebels has declared the shut down by Haroon on March 27, 2016 after so many troops that are being lazy to attend the events nowadays as well as the leader that doesn't care, except the other few leaders. The Night Rebels has transferred the empire nation to the Light Troops before the return date to give it back. Sadly the LT has shut down by Waterkid after admit that he multilog by other armies. The rest of the NR troops are mostly at Night Warriors, some of them - and the Water Ninjas.

By the month of April, half of the legends and leaders has discussed about the return date of Night Rebels to solve the problem for this army and how to make things right. The Night Rebels will be having a return date which is June 10th, but the NR will be back by May 12th to get back into track before the return date.

More history to be written soon.

(I will be researching this)