(Above is the treaty signed by Moneytrees)

Following the ceasefire, interactions between the two armies ceased. However, on June 8th, Water Ninjas’ leader Skyfish posted the following picture, showing that the Frost Squad was threatening war.[1] 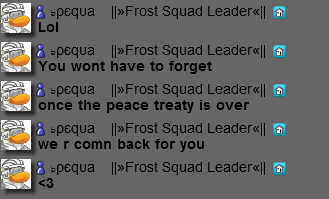 (Above is Frost Squad Leader Pequa)

Due to this, the Water Ninjas had a reason to ignore the ceasefire. The Water Ninjas proceeded to ban anyone associated with the Frost Squad on their xat chat. A war was brewing.

This threat was soon met with an actual declaration of war by the Frost Squad, who did not state any reason for war in their declaration of war post. Shortly after the Frost Squad’s declaration of war, the Water Ninjas retaliated by scheduling their own invasions. They also sought help from their allies, the Chaos. The Chaos Army announced their participation in the war, as well as revealing that there were more armies joining each side of the war. The following is taken from a post entitled “Addressing The War” by Chaos leader Epicorange1.[2]

Recently, FS and AoS have declared war on WN. WN are our allies and we will be assisting them in this war along with LGA. AoS is just SPA, so this war will not be to hard. Our alliance will destroy any army that opposes us. This time right now is your only chance for peace. If you don’t accept now, then you won’t get a chance to later. Chaos is a war army, and we will be unleashing our true potential in this war. This was later followed with a list of armies participating in the war on both sides.

The Sky Alliance involved the obvious Water Ninjas and Chaos Army. The alliance grew to include the Lime Green Army, Royale Penguins, and Smart Penguins. Also, the Guardian Penguins and Dark Ninjas were allies of Chaos that were called upon to assist the Sky Alliance's efforts. On the other hand, the Red Legion included the Frost Squad, Ace of Spades, Sun Defenders, White Penguin Rebellion, and the Soda Pop Army. The Striking Raiders, Ice Hounds, Lightning Strikers and Redemption Force were armies that decided to remain neutral. However, on June 9th, the Lightning Strikes changed their minds and joined the Sky Alliance. The Water Ninjas and Frost Squad had both called upon mutiple allies. This war was starting to become much larger than originally imagined.

The first major battle was the Defense of Parka, a Water Ninjas' server. The Red Legionaries reached a maximum of around 13 troops. This was not enough to overcome Sky Republic's high of 18. What is important of this battle is that it showed the Sky Republic and Red Legion were not as strong as they looked on paper. Although both sides had mutiple allies, it was mainly the Water Ninjas, Chaos, Frost Squad and Ace of Spades who brought the troops. 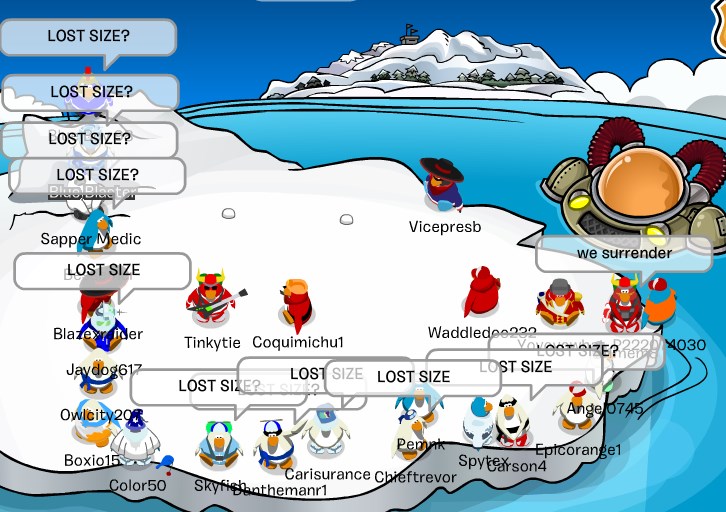 (Above is an image from the Defense of Parka)

The second battle would become even more lopsided towards the Sky Republic. The Red Legion did not even bother to show up.

(Above is a J-bomb from the Defense of Sleet)

On June 11th, Epicorange1 declared that the Sky Republic had won.[3]

When the war begun, Red Legion had the advantage. They began with more armies, scheduled invasions first, and were prepared first. Our ally Water Ninjas called us to help them. We quickly reacted by forming the Sky Alliance. We got many armies to join our alliance against the infamous Red Legion. We fought through battles and won the war 3-0. Ace of Spades and Sun Defenders both dropped out of the war knowing that we would prevail. WPR have no servers. The leaders of Frost Squad left the army, leaving nobody in charge. Chaos, WN, and LGA will invade the rest of the FS nation. I am really proud of every soldier that fought hard during the war. With this war over, it is time for us to finally have peace and try to rise even more.

I hope this alliance with all armies in the Sky Alliance will continue. This alliance showed that determination will lead to success. In the future, maybe we will reunite and fight the evil once more.

This formally signaled the end of both alliances. In the case of Sky Republic, they dissolved as their victory meant that an alliance was no longer needed to be mainted. Red Legion on the other hand had already fallen into shambles. The disappearance of the Frost Squad's leader, the key cog for the Red Legion, meant that they stood no chance.

SMAC conducted interviews prior to the war. These are presented below. Alex is the reporter from SMAC, Wyoskyguy is one of the Chaos leaders.

Alex: What was the Chaos’ original reaction to Frost Squad’s declaration of war against the Water Ninjas?

Wyoskyguy: Water Ninjas came to us, asking for a peace treaty with them, so we wouldn’t join FS’s Red Legion.

Alex: Do you feel that the Chaos are well prepared for this war?

Wyoskyguy: Definitely. Orange and I recently returned and we convinced Sapper to return – We just gotta keep our heads straight and not get cocky.

Alex: How long do you expect this war to last?

Wyoskyguy: I don’t expect it to last very long, but I hope it will

Alex: Do you think the Chaos have a lot to gain from this war?

Wyoskyguy: We could, but it’s still too early to tell

Alex: Any final comments on the war?

Alex: Okay, thanks for your time.

Alex: What was the Frost Squad’s purpose for declaring war on the Water Ninjas?

Pequa: Well, Water Ninjas are our enemies and their troops/leaders have been getting on our nerves

Alex: Were you expecting the creation of alliances to create a semi-world war?

Pequa: Well, I knew something big was about to go down. And once LGA turned to the Sky Alliance we knew that we had to get stronger. It’s sure to have an impact. Each of the alliances are able to max 20+.

Alex: Do you feel that the Frost Squad is well prepared for this war?

Pequa: As long as our troops keep recruiting, all of our owners are autotyping while sleeping and doing the best we can to get new troops. Right now, we are just worried on our alliance’s well being.

Alex: Any final comments on the war?

Pequa: Join the Red Legionaries Alliance! In other news: The Sky alliance just defaced our chat.

Alex: Thank you for your time.

Alex comments on the situtation by saying "As we can see from the interviews, both leaders feel that their army is prepared to fight in this war. Make sure to keep up with SMAC as our reporters bring you more news on this war."

The news site, Small Army Central, described the event as a Small Medium World War. However, the war did not exactly live up to this expectation. At first, this war had potiential to become one of the greatest alliance battles in small/medium army warfare. It is not hard to become the greatest when CP Warfare had rarely seen small armies engage in alliances. That is not to say it does not happen but it is quite the rare occurence. Indeed, major armies are the ones who create alliances as the stakes are larger for them.