The Tamales of Club Penguin (or the Tamalean Empire) was a small/medium Club Penguin army conceived on the 28th of July, 2020, becoming fully operational on the 15th of August.

The idea of the Tamales army first came to be when Sidie9 and Emma (lunch room) of the People’s Imperial Confederation discussed a rebrand of their army, due to a depression that had plagued PIC for a significant period.

The Tamales would remain a consistent small/medium army throughout its lifetime, participating in the Subzero Showdown Tournament.

The army was shut down by its creators after the newly incumbent Commanders-in-Chief attempted to colonize the army under the Recon Federation of Club Penguin. The founders chose to deface the Discord and announce the army's immediate closure. This happened alongside the unsuccessful transfer of their capital Deep Freeze to the Rebel Penguin Federation.

The First Amendment of the Tamalean Constitution was enacted to prevent the Recon Federation from seeking to revive the Tamales and continue operations.

Underline: indicates that the leader was also a founder of the army. 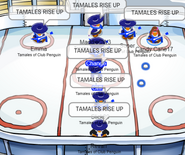 Statement of closure following the defacement of the Discord 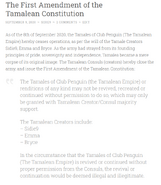