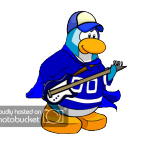 CPWorld2001 (a.k.a Flen), joined the Club Penguin Army arena back in November for 2012. His first army was the Rebel Penguin Federation.

CPWorld2001's (We will refer to him as CPW) first army, as stated above, was the RPF. While CPW was waddling around with his friends in Club Penguin, he came by a penguin who was chatting "Join the Rebels"

That particular event caught CPWs' eye. He decided to go and have a look. Came out, that Silverburg, the then leader of RPF, was the one recruiting and he thus became the man who recruited CPW into this arena.

CPWs' journey in RPF has been both good as well as controversial. As soon as CPW became a part of Club Penguin Armies, he also became a follower of Elmikey.

Under the leadership if Lilstar, Snaily, Silverburg, Elmikey and Tanner/Danny, CPW became the highest moderator in RPF. Soon after, RPF witnessed the removal of Elmikey. During this time, CPW decided to stay with RPF and he managed to become 2nd in Command under the leadership of Tanner/Danny. If interviewed today, CPW always say that Tanner/Danny was the person that provided a boost to CPWs' career in CP Armies.

CPWorld2001 later that day decided that he would also be joinning the Dark Warriors which was back then led by xxToysoldier, Drake, PufPuf, Elmikey, Silverburg and Ambrosha.

CPW joined as mid-moderator and made his way up to highest moderator with a month. However, just as he was on the peak of getting 3rd in Command, Elmikey was once again removed. This time, CPWorld2001 decided to stick with Dark Warriors. However, due to being kiddish back then, CPWorld2001 decided to confront the Dark Warriors leadership as he thought they were bias. Leading to that, CPWorld2001 accused Dark Warriors leadership of trying to win battles against the Light Troops (Elmikey later joined the Light Troops) using foul play.

This led to a huge controversial scenario within the CPA Arena. Due to this, CPWorld2001 faced backlash from both Dark Warriors and Light Troops.

Finding himself alone, CPWorld2001 went to Lilstar - who had joined Ice Warriors as adviser - for advice. CPWorld2001 has always admired Lilstar. Due to this, he finally decided to join the Ice Warriors.

CPWorld2001's time is Ice Warriors was perhaps filled with controversies as well as great popularisation.

Soon after joining the Ice Warriors, CPW also became part of the famous CPA news site, CP Army Central. During his time in both Ice Warriors and CP Army Central, CPW became popular for using bots recruiting on CP Armies. Back then, many armies use to use bots for recruiting and influencing players on Club Penguin.

As hatred grew against CPWorld2001 due to the high influence of Ice Warriors on CP, he faced major backlash from the entire CPA Community. He was termed as "Hacker" on CPA. However, as a matter of fact, it was just a hoax which was spread by Dark Warriors and RPF leadership.

Later in that year, CPW became the Ausia leader of Ice Warriors. Under CPW, Ice Warriors ausia division saw massive growth leading to size of 30+ on Club Penguin. This was perhaps another reason why CPWorld2001 became popular in CP Army Arena.

At the beginning of 2015 (guess, I don't remember as such), Ice Warriors leadership saw major changes. The then leadership of Ice Warriors consisting of Kingfunks4, Tes7 and Ghost was impeached. This was perhaps the biggest gamble played with in the CP Army Arena. Removing the leadership, the creator of army, Iceyfeet1234 decided to handover Ice Warriors to the "Drew Crew" which consisted of Andrew24, Spuguy202 & Final Chaser. Great leadership skills and tendency to adapt with CPA Contemporary politics, CPWorld2001 became a huge fan follower of Iceyfeet1234.

CPWorld2001 made it to Leader-in-Training under the Ice Warriors. He also led alongside Andrew24 and Spyguy in various events. CPWorld2001 has since then stuck to the Ice Warriors and often denote it as "2nd Home" to his CPA career.

**More Information to be added soon**

Retrieved from "https://clubpenguinarmy.fandom.com/wiki/User:Cpworld2001?oldid=25211"
Community content is available under CC-BY-SA unless otherwise noted.